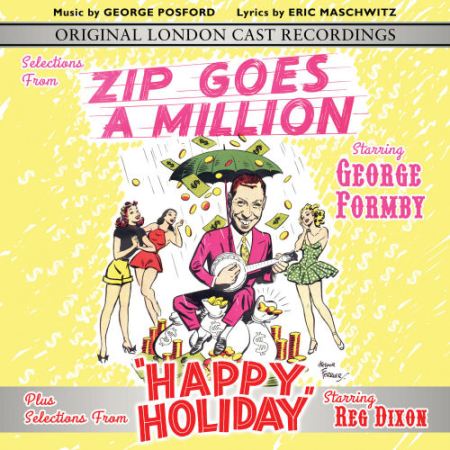 Stage Door Records has just released a highly pleasurable CD of selections from the London musicals, “Zip Goes a Million” and “Happy Holiday.”  These two musicals (both with music by George Posford and book and lyrics by Eric Maschwitz) opened in London in the 1950s and, unfortunately, did not receive full-length cast recordings.

However, there were some songs preserved from each of these shows.  Adding in cover versions of these songs, as well as selections from a radio broadcast, Stage Door Records has painstakingly compiled all of the existing material from “Zip Goes a Million” and “Happy Holiday” and the result is an utter delight.  This CD runs a lovely 77 minutes and, even if this reissue may appeal most to diehard show fans, “Selections from ‘Zip Goes a Million’ and ‘Happy Holiday’” Original London Cast Recordings deserves to be heard by just about anyone interested in musical theater.

Reading from the excellent liner notes by Stewart Nicholls, “Zip Goes a Million,” which opened in London in 1951, is based on the play “Brewster’s Millions” (which, in addition, has received several film versions).  With producer Emile Littler at the helm and starring popular British star George Formby, “Zip Goes a Million” was a huge hit and the existing songs from the musical make it easy to see (and hear) why.

George Formby is featured on the songs “Saving Up for Sally,” the zesty title number, and the charming duet, “Ordinary People,” with costar Sara Gregory.  The other selections from the show are accorded to the handsomely voiced Warde Donovan, including the splendid ballad “It Takes No Time to Fall in Love” (also sung by Sara Gregory) and the moving “Nothing Breaks but the Heart.”  In addition, Donovan sings a bit of the zippy “Running Away to Land” (featured on the same track as the title song).  Finally, Formby can be heard singing the funny tune “Pleasure Cruise,” which was, according to the notes, written by Harry Clifford and Fred Cliffe (but dropped) for a 1936 film that starred Formby.  Nonetheless, “Pleasure Cruise” fits in just perfectly with the other “Zip Goes a Million” songs.

Beyond these original cast recordings, Stage Door Records has added cover versions and instrumentals from “Zip Goes a Million,” including one particularly valuable track of Reg Dixon singing “Ordinary People.”  This inclusion is noteworthy because Dixon assumed the role that Georgy Formby played when Formby had to leave the show because of illness.  Even rarer on the CD are excerpts from “Zip Goes a Million” that were featured on a 1951 BBC radio broadcast.  This broadcast lets a listener hear live performances from the show and it even offers one extra song, “Thing About You,” not previously recorded and featuring Warde Donovan and Barbara Perry.  All of these selections from “Zip Goes a Million” are just wonderful.

After the popular success of “Zip Goes a Million,” producer Emile Littler talked the song writers, George Posford and Eric Maschwitz, into teaming up again in 1954, for the show “Happy Holiday,” with Reg Dixon in the starring role.  Unfortunately, this follow-up show was not a success.  Still, Dixon did record four songs from “Happy Holiday” and they all sound like winners.  The numbers from the show include “Surprisingly,” “There Goes Charlie,” “The Feeling of Falling in Love” and “Sew a Silver Button on the Moon” (the latter two songs also featuring Janet Brown).  These selections are so freshly-minted and marvelous that they can almost make one feel that “Happy Holiday” should have been a hit.  Also, there are three cover versions of the song “Surprisingly” included that help fill out the recording.