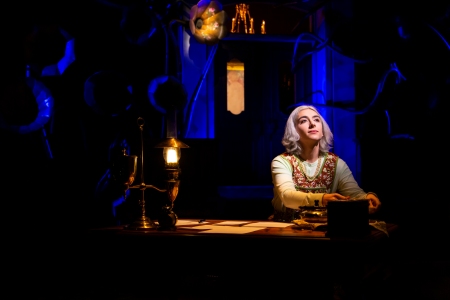 Long Wharf Theatre is currently stunning audiences with its astonishing production of Doug Wright’s incisive play, “I Am My Own Wife.”  This show focuses on the real life story of Charlotte von Mahlsdorf, a transgender woman from East Berlin who lived through many horrors, including the Nazis and the Communists, and yet somehow survived, and with dignity.  The tale of Charlotte’s life is fascinating all by itself, but so is the way that this play has been written and staged.  A one-person show, the mesmerizing Mason Alexander Park portrays Charlotte, as well as over a dozen other people, including, amazingly enough, the playwright himself.  Thus, this play adopts a sort of patchwork narrative, with Park slipping in and out of characters, just by using a different voice or a change of body language.

“I Am My Own Wife” runs roughly two hours, with an intermission, and it is most definitely not for everyone.  In addition, the events in Charlotte’s life get a little confusing, especially in the second half, and, at times, it is hard to know exactly when things occurred, and in what time frame.  But no matter.  The power of this production is astounding and any flaws that crop up are quickly eradicated, as the sheer theatricality of the show takes hold.  “I Am My Own Wife” is simply outstanding, with Park’s performance of Charlotte a truly remarkable achievement.  So, if you are able to go with “I Am My Own Wife” at Long Wharf Theatre, it is quite a journey and certainly a striking portrait of one person managing to survive against all odds, and being completely true to oneself.

On a spectacular set (brilliantly designed by Briiton Mauk), the audience is greeted to the sight of the entrance of a museum in Berlin, which belonged to Charlotte, as well as a panoply of gramophones framing the top and sides of the set.  There is also a working gramophone onstage, which is frequently used and referenced to, as well as a desk and chair.  But this setting is essentially minimalist, with the primary focus of the show being Park’s transcendent performance.  Indeed, once this show takes hold, “I Am My Own Wife” proves to be a riveting experience.

It’s hard to reference different parts of the plot, but it is established early on that Charlotte, as a young child, killed her father and was incarcerated.  But, somehow, she was able to live through that experience to establish quite an extraordinary life, though that life is often shrouded in mystery.  The choice of the playwright casting himself as a character in the play’s narrative is certainly a novel choice and there are quite a few moments where one can see Doug Wright asking himself aloud whether or not to transform Charlotte von Mahlsdorf’s life into a play. It is very fortunate that this playwright was able to document this story in such precise detail and, some muddled moments aside, it proves to be a monumental theatrical experience.

Director Rebecca Martinez has done a terrific job staging this show and the strength and fortitude of Park’s performance must be partly accredited to her, as well.  Being a one-person show, “I Am My Own Wife” would rise or fall depending on who was cast in the play.  Long Wharf Theatre is blessed to have this performer as its star, and Park merely needs to waltz quietly alone onstage to take your breath away.  Adding to this spellbinding effect are wonderful costumes, designed by Daniel Tyler Mathews, and the lighting design by Jennifer Fok lends considerable shadings to the tale being told.

The sound design and original music by Kimberly S. O’Laughlin are excellent and quite haunting, as is the entire show.  What you will be left with, though, is the sight of Mason Alexander Park casting a transfixing gaze at the audience and ever so carefully guiding one through the labyrinth that was Charlotte von Mahlsdorf’s life.  “I Am My Own Wife” is one of the best and most intense shows to open recently and it sets quite a high benchmark for future productions to match during this current theatrical season.