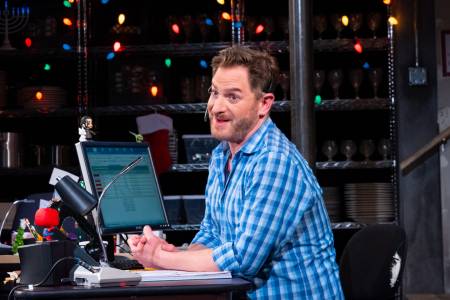 TheaterWorks is currently presenting an absolutely splendid production of Becky Mode’s riotous one-man play, “Fully Committed.” But, although there is just one actor onstage, that actor must portray over thirty different characters during the play’s ninety minute running time.  Thankfully, TheaterWorks is blessed to have the hilarious Jamison Stern playing all these characters and he is flat out brilliant.  I saw Stern to great effect in a previous play at TheaterWorks, “The Legend of Georgia McBride,” but he is even better here, making everything he does look easy, which is no small task.  Taking on both male and female roles, this actor is absolutely perfect and his performance alone would make this production a must-see.

But “Fully Committed” is a terrific play to begin with.  It first premiered Off-Broadway in 1999, and I was fortunate to see Roger Bart star in the show during its original run.  Wisely, the playwright has since made revisions to the play, to reflect changes to society over the last twenty years, and “Fully Committed” is, indeed, right up to date.  Director Bill Fennelly has done a marvelous job staging this play, with the excellent aid of scenic designer Brian Prather, who has fashioned the ideal setting for this show.  “Fully Committed” is a real lark, full of big laughs, as well as a few touching moments, and TheaterWorks should be commended for scoring so strongly with this show, which will leave you with a big grin on your face.

The plot, such as it is, concerns the character of Sam, played by Stern, a struggling actor in New York whose job it is to answer the almost constant calls for reservations at a super-posh restaurant.  What makes this play extra special—and an actor’s dream—is that Stern also plays every person who calls on the phone.  Through the use of body language, changes in accents and voices, this actor believably plays over thirty other parts (including female characters), in addition to his own.  Working with the director, Stern is sublime and one truly feels like there are several people onstage during the course of the play.

“Fully Committed” is also blessed with a team of fantastic artists behind the scenes, who help make this production work so well.  The appropriate set design, by Brian Prather, is essentially a basement, with a set of stairs leading upwards on the left-hand side of the stage.  And, of course, there are many phones, as the constant calls to make reservations come in.  John Lasiter has done a great job of lighting this show and a special word must be mentioned about the precise and phenomenal sound design by Frederick Kennedy.  If ever a show needed perfectly time cues for phones to ring, it is “Fully Committed,” and this show certainly comes up aces in that department.

“Fully Committed” at TheaterWorks is full of hysterically funny antics and moments, but, in between the laughs, one can also be touched by the way Stern makes Sam’s telephone relationship with his father so moving.  The pacing of the show is lightning fast and “Fully Committed” operates like a perfectly calibrated machine.  It also showcases an awesome star in Jamison Stern, who lights up the stage and fills the play with dozens of characters, even though he is completely—and gloriously—on his own.

“Fully Committed” continues performances at TheaterWorks in Hartford, CT through September 1, 2019.  For tickets, please visit www.theaterworkshartford.org or call the box office at 860-527-7838.

2 thoughts on ““Fully Committed” at TheaterWorks by Zander Opper”